Here the development of the Oetker Group can be traced with the aid of many milestones which, drawn from all business fields, provide insight into the decisive moments in the history of this group of companies.

The pharmacist, Dr. August Oetker, lays the foundation for the company Dr. Oetker with the development of the baking powder Backin.

Chemische Fabrik Budenheim is founded in 1908 and taken over by the Oetker company. Its head office is located in Budenheim on the Rhine (Germany). 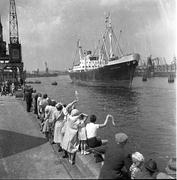 The Dr. August Oetker company acquires an interest in Hamburg Südamerikanische Dampfschifffahrts-Gesellschaft, which was sold at the end of 2017.

The founder’s grand-son, Rudolf-August Oetker (1916–2007) takes over the management of the family business and continuously opens new divisions.

Bankhaus Lampe, founded in Minden, East Westphalia (Germany) in 1852, moves into the ownership of Rudolf-August Oetker. He relocates the firm’s headquarters to Bielefeld. Today the company is one of the leading, independent private banks.

The foundation stone for today’s Beer and Non-Alcoholic Beverages Division is laid with the acquisition of Bank für Brauindustrie. This bank has majority shareholdings in Frankfurt, Berlin and Dortmund breweries, which are expanded and to which subsidiaries are added. The acquisition of the Radeberger Pilsener beer brand after German reunification subsequently gave the new name, Radeberger Gruppe, to the brewing group, which had long traded as the Binding Group.

Acquistion of the Hôtel du Cap - Eden Roc in Antibes on the Côte d'Azur (France).

Dr. h. c. August Oetker becomes General Partner of Dr. August Oetker KG and Chairman of the Executive Board of Dr. Oetker GmbH. He focuses the companies of the Oetker Group on core sectors and successfully drives internationalization.

Takeover of the food company Martin Braun, a leading manufacturer of baking ingredients, which later becomes the Martin Braun Group.

Acquisition of the hotel Château Saint-Martin & Spa in Vence (France).

Founding of Oetker Daten- und Informationsverarbeitung, OEDIV for short, which is active in the IT sector.

Founding of the Oetker Hotel Management Company (OHMC), which specializes in the management of unique, externally owned hotels.

Richard Oetker takes over from his brother August. He has been a member of the Executive Board of Dr. Oetker GmbH since 1996. His successes include the establishment of the eastern European markets since the mid-1990s.

Founding of the company Oetker Digital, which supports the Oetker Group moving into the future with digital innovations and business models.

The former Chief Financial Officer of the Oetker Group, Dr. Albert Christmann, succeeds Richard Oetker in Group Management and as Chairman of the Executive Board of Dr. August Oetker Nahrungsmittel KG.

Short film about the Oetker-Group

We would be happy if you agreed that we and our partners use cookies and similar technologies to understand how you use our website. This enables us to better understand your user behaviour and adapt our website accordingly. Furthermore, we and our partners would like to use this data for personalised offers on their platforms. If you agree to this, please click on "Agree". Please refer to our privacy policy for detailed information. You can change your mind at any time.

We need these cookies and similar technologies to enable the basic functions of our website. This includes, for example, saving these settings. This is strictly necessary so that you cannot switch this off.

In addition, we would like to learn more about how you use our website in order to optimise it for you and other users. To this end, we use cookies and similar technologies that map user behaviour and thus help us to improve our offer for you.

To ensure that we can tailor our marketing campaigns to your needs, we collect how you come to our website and how you interact with our advertisements. This helps us to make not only our ads, but also our content even better for you. Our marketing partners also use this information for their own purposes, e.g. to personalise your account or profile on their platform.